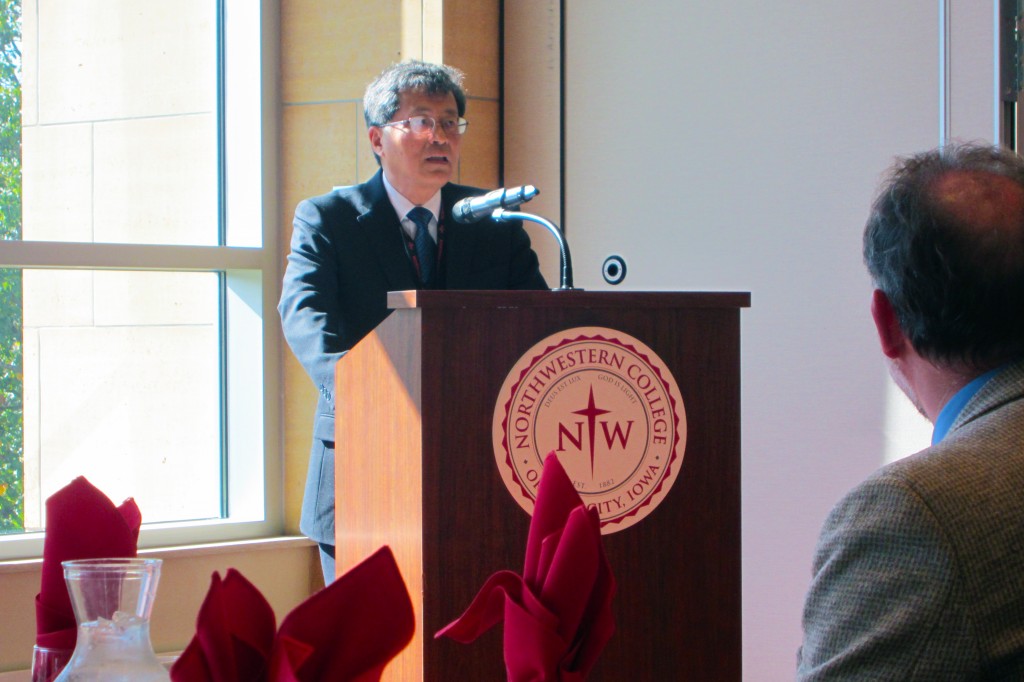 Ladies and Gentlemen, good afternoon! We are very happy to be here at Northwestern College on such a beautiful autumnal day. I must apologize at first that one boy freshman student who is expected to be here today could not come because he could not pass the security check in time at JFK Airport in New York City and two business persons, the chairman and the secretary general of the Orange-kai who helped him, could not fly to Sioux Falls with him.

In December, 1989, late Prof. Ryle VanderWerff of Northwestern College (NWC) and Prof. Muneharu Kitagaki, the first President of Keiwa College (KC), met together at Tokyo Station to discuss the educational co-operation based on the same Christian liberal arts education for the first time.

In November, 1990, 5 months before the foundation of KC, NWC and KC made an educational contract here at NWC. President Kitagaki tried to make KC as the center of the municipal communities. So he took important community members to this college town. This was the beginning of the relationship between NWC and KC and also the relationship between Orange City and Shibata City/Seiro Town.

This delegation from KC is a response to your delegation from NWC in March, 2016. We take one student (originally two students) as a symbol of resuming student exchange by courtesy of Orange-kay.

I would like to express my thanks to Prof. VanderWerff and Prof. Kitagaki, who began a good work with their dedication and earnestness, and to those who try to continue it. I also try to continue it and I expect and pray to the Initiator of every good work for the fruitful future. Thank you.